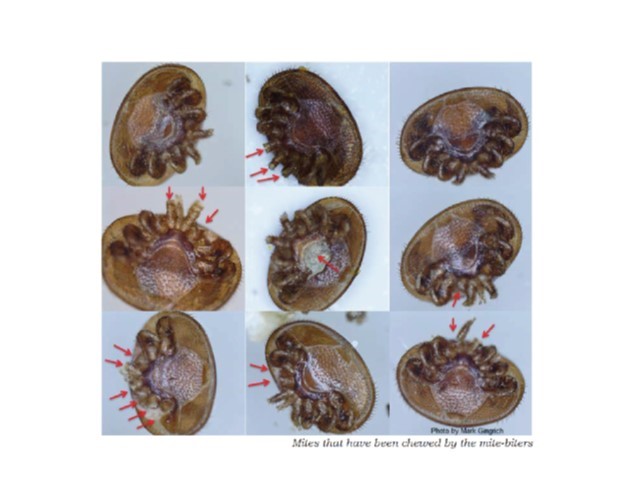 The beekeeping industry is facing serious challenges to maintain the necessary number of colonies to supply the demands for crop pollination. One of the major problems that honey bees have comes from the ectoparasitic mite, Varroa destructor, which transmit lethal honey bee viruses. Currently, most managed honey bee colonies cannot survive the winter without varroa treatment, and even with intensive management regimes, beekeepers are losing on average 50% of their colonies in Pennsylvania.

Photo 1. Varroa mites that have been damaged by ankle biting bees, photos by Mark Gingrich.

The Pennsylvania Queen Improvement Project is a beekeeper-led initiative that started in 2010 with the goal of improving hardy Pennsylvania survivor honey bee stocks. The project was conceived by the‑back then‑president of the Pennsylvania State Beekeeping Association (PSBA) Warren Miller, Maryann Frazier, Jeremy Barnes, Mark Gingrich, and Jeff Berta. But things really took off when Jeff received a USDA farmers grant in 2011 and initiated this project that has been building since then. Currently, other beekeepers actively participate of this breeding queen improvement project including Charlie Vorisek in Linesville, Mark Gingich and Steve Finke in Kutztown, Bernie Svidergol in Ebensburg, and Steve Repasky in Pittsburgh. Last year, our group organized 5 field days where attendees learned the basics of queen rearing and also received queens with improved latest genetics. These field days reached over 320 participants this past year.

In 2015, we joined forces with Dr. Hunt at Purdue University, and the Heartland Honey Bee Breeders Coop (HHBBC), because he discovered that some honey bees chew the legs off of varroa mites and then cause them to drop off the colony and die (photo 1). We wanted to add this mite-biting behavior trait to the Pennsylvania survivor stock that we were working on. Since 2017, a group of 6

beekeepers has been working with the HHBBC to compare how the mite-biting Purdue bees compare to feral bees from Pennsylvania and packaged bees from the south. Each beekeeper has been independently comparing the following traits in the Purdue, feral and control (package) honey bees: mite count, mite chewing percentage, hive weight, and winter survival.

The results from 2017 show strong differences among the Purdue, feral and control (package) colonies. The key results are that the Purdue bees showed significantly more chewed mites than the feral or control bees (Fig. 1). In addition, the Purdue colonies also showed the highest weights among all the colonies tested. The average weights were Purdue (132 pounds), control (97 pounds) and feral (85 pounds). Winter survival was measured in March of 2018 and the results indicate that the Purdue and feral bees showed significantly higher survival than the control packaged bees (Fig. 2). Specifically, 21 out of 30 Purdue bees survived (70%), for feral colonies 10 out of 16 survived (62.5%), and for the control 6 out of 18 survived (33.3% ).

Figure 1. The proportion of mites that were damaged in colonies from different sources: package (control), feral, and Purdue bees.

Our data indicate that on average the Purdue and feral bees have better overwintering success than packaged bees. These results are very promising and suggest that the queen improvement efforts of our project are generating effective outcomes.

The research advisor of the project is Dr. Margarita López-Uribe from Penn State University. Dr. Brock Harpur, recently hired at Purdue University, will also be working on this project this coming year. Stay tuned for the result of our ongoing efforts in 2018 and 2019 with this work. If you have you would like to participate of our program, please join us; we are stronger together!