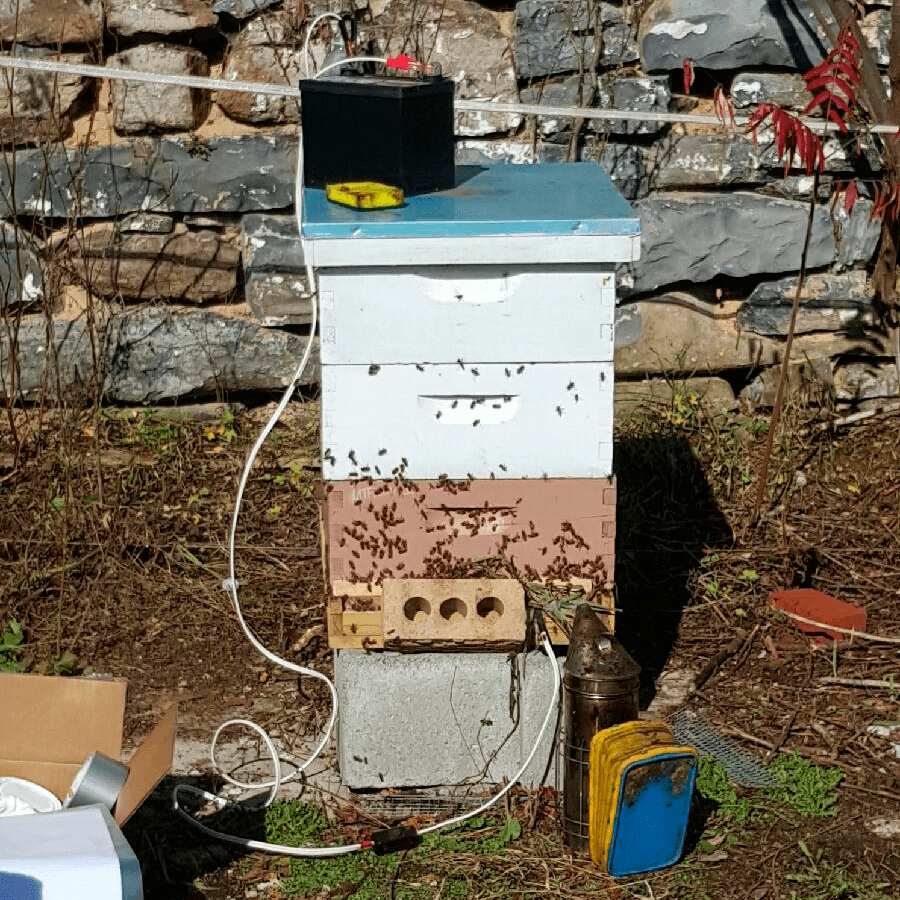 We have begun our first project in the Lopez-Uribe Lab (@lopezuribelab). Our aim is to compare the effectiveness of two methods of oxalic acid (OA) treatments for mite control: the trickle method (trickling of OA sugar syrups into honey bee colonies) and vaporizer method (OA fumigation through vaporization).

Background: Oxalic acid (OA) has been adopted by many beekeepers worldwide as a valuable tool for Varroa control. OA toxicity to Varroa has been known for several decades based upon research in Asia, Europe and Canada and in late 2015 it was approved in the U.S for use in honeybee hives. The two most common methods used to apply OA to bees are the trickle or liquid solution and the vaporizer. It is best to treat when there is little or no brood present in the colony, typically fall/winter, which also provides beekeepers with an excellent “cleanup” tool for colonies with residual varroa populations that rebound in late summer. Mite mortality is the result of contact with OA and only effects phoretic mites. Research has also suggested that cooler temperatures are better to treat because there may be a correlation with increased mortality when applied during periods of high humidity.

Our experiment began October 31st. The high temperature was 55°F, just cool enough for the bees to remain clustered inside the hive. We took a mite count via sticky boards two days prior (October 29st) and two post (November 4th) treatment. For the trickle method, we prepared fresh OA solution by dissolving 35 g of OA dihydrate in 1 liter of one to one warm sugar solution prior to treatment. The amount of OA applied to each colony was dependent on size of the colony. A 50 ml syringe was used to trickle the oxalic acid sugar solution directly onto the bees that are clustered between the frames (occupied bee space) in each hive body. The maximum recommended dose for one colony is 50 mL, with an average of 5mL per bee frame . We used between 35 and 45mL for most of our colonies.

For the vaporizer method, we followed the instructions that come with a vaporizer. Note that these instructions will vary with each vaporizer. We treated each colony with 2g OA dehydrate that was sublimated with a JB4 vaporizer. We placed the vaporizer in the hive entrance and blocked it with a wet cloth. It took about 2 minutes for the OA to fully vaporize once it was inside the colony. We removed the vaporizer and closed up all entrances for 10 minutes, including blocking the entrance with a cloth and placing a plastic plate under the screen bottom boards. Previous studies have reported high efficacy for both methods however, the risk to the applicator is greater during vaporization due to the potential of inhalation of the OA fumes. Be safe and stay tuned for the results of our experiment.

Written by Katy Evans, Field Technician in the López-Uribe Lab.