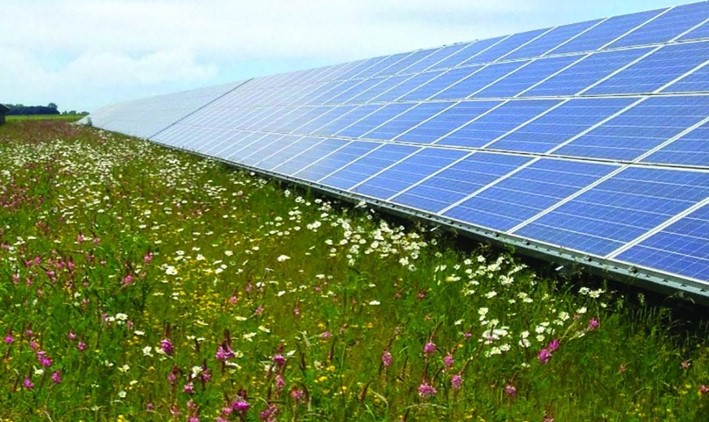 One of the major drivers of the decline of honey bee colonies in the United States is the lack of sufficient high-quality forage. The transformation of large amounts of acreage from natural habitat into field crops, such as corn and soy, has led to (1) increasing amounts of pesticides in the environment—which are used to control major pests that attack these crops planted in monoculture—, and (2) the decreasing availability of foraging areas for honey bees because most field crops do not provide nutritious pollen and nectar for honey bees (Otto et al. 2016 PNAS). As a result of the managed honey bee crisis, the Obama administration in 2015 wrote a Presidential Memorandum directing the creation of a Task Force to “Promote the Health of Honey Bees and Other Pollinators”. Two of the main goals of this task force included the reduction of honey bee colony losses to economically sustainable levels and the restoration of millions of acres of land for pollinators through combined public and private action. The mandate for increasing the amount of high-quality forage for managed honey bees has led to conflicts between managers of lands for conservation purposes who are concerned about competition between manage honey bees and wild bees.

Why would owners of conservation lands be concerned about supporting honey bees? After all, honey bees are in decline and we need to help them, right? Well, it is not that simple. Honey bees are an introduced species in the United States. They were first introduced a long time ago (early 18th Century) and have since then been naturalized in many of our ecosystems (especially in the southern US). As mentioned before, we rely on them for the pollination of many of our crops. However, honey bees have some biological traits that make very good competitors and help them be very successful species wherever they are introduced. First, honey bees use floral resources from many many different types of plants, so they can easily find food anywhere they go. Unlike many of the native bees in North America that have narrow diets, honey bees are considered food generalists. Second, honey bees are social organisms that live in large colonies (up to 80,000 individuals per colony; Figure 1) and use complex ways to communicate with nestmates and recruit them to effectively find where food is located. Every time one honey bee colony is placed in any given landscape, tens of thousands of individuals go out to forage and will collect pollen from flowers that could be used to feed 100,000 solitary wild bees (Cane and Tepedino 2017 Conservation Letters). Having a large number of bees available to pollinate flowers is precisely what an almond grower wants from managed honey bee colonies because millions of flowers are waiting to be pollinated in their farms. However, lands that are managed for conservation purposes have a different goal—supporting native bees and native plants—and even the temporary placement of honey bees into these landscapes may create a conflict.

But, what does the data say? Is there scientific data supporting concerns of competition between managed honey bees and wild bees? A recent paper published in 2017, summarized all the existing data from studies that have investigated the question of competition between managed and wild bees (Mallinger et al 2017 Plos One). The authors of the study reviewed 146 peer-reviewed papers that investigated effects of managed bees on wild bees looking at three potential types of negative responses: (1) less available food for wild bees (direct competition for floral resources), (2) preference for pollination of exotic plants (driving the decline of native plant species), and (3) the spread of pathogens from managed to wild bees. Including all the studies published around the world, the authors found negative effects of managed bees on wild bees in 53% of the studies while 28% reported no effects and 19% reported mixed effects. The evidence from studies in the United States—where honey bees are not native—indicate that honey bees negatively impacted the availability of floral resources for wild bees in 70% of the studies. The second group of studies investigating the impact of managed bees on native plant communities reported both positive (36%) and negative (36%) effects, with the remainder reporting no or mixed effects. Finally, 70% of the studies on pathogen transmission reported negative effects of managed bees on wild bees. Since that study was published in 2017, there have been additional studies on the subject in the US indicating that honey bees disproportionately impact the most abundant floral resources, which may cause wild bee species to forage on lower-abundance resources to avoid competition (Hung et al. 2019 Proceedings of the Royal Society B).

Overall, the evidence supports that managed bees can have negative effects on wild bees via competition for floral resources and pathogen transmission (see also Wojcik et al. 2018 Environmental Entomology). Even though most of these studies have not investigated the effects of competition on wild bee reproductive success—which would assess the long-term effects of competition, the data collected so far call for taking precautions when deciding to place high densities of honey bees in any given landscape, especially high-quality natural areas. On the other hand, there is no strong evidence to support claims about honey bees having a direct negative impact on the reproduction of native plants. Indeed, honey bees seem to provide pollination services to both crops and native plant communities.

In summary, the use of conservation lands as foraging habitat for managed honey bees should be restricted or be decided with precautions. For example, if the goal of conserving the land is to conserve native plant communities, introducing honey bees may not interfere with this goal in the short term (even though the long term consequences of wild bee decline on plant biodiversity have not been properly studied). However, if the conservation purpose of the land encompasses broader goals to preserve biodiversity, the introduction of managed bees may lead to direct competition with wild bee populations. New initiatives such as using cover crops and wildflower field margins near agricultural areas or planting habitat for honey bee foraging near solar panels may provide better solutions to the existing need for foraging habitat for managed honey bees (Figure 2). The high losses of honey bee colonies in the US is a problem for agricultural production but it is not a conservation problem (Colla and MacIvor 2017 Conservation Biology). Therefore, mechanisms to solve honey bee decline should not interfere with conservation efforts to protect wild bee populations.