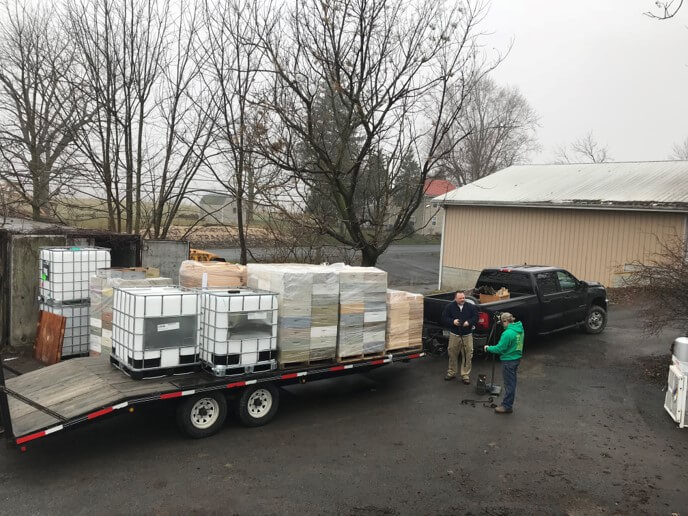 Set-up for the COMB project is complete!  The process of purchasing new equipment, irradiating used boxes, manipulating equipment to match the stakeholders’ suggested protocols, organizing and distributing all the right items, and then setting them up for the bees was quite an undertaking!  All told, 35 pallets of equipment were purchased and 5 pallets of used boxes were irradiated!  Everything was gathered in a small warehouse in Bethel, PA in February and March.

An assembly line of sorts was set up to make the special combs for the treatment free system.  First, all-in-one small-cell (4.9 mm) plastic (unwaxed) foundation was cut to fit into empty wooden frames.  The foundation was then nailed in place. Clean wax was purchased from Dee Lusby, who keeps bees without treatment and far from agriculture in the AZ desert.  This wax was melted and applied in a thin layer to the foundation before being placed in a new box with a roughened inner surface.

Equipment was then sorted and distributed to the 6 PA farms.  Apiary setup involved positioning the proper equipment in arcs 4 colonies in each treatment.  The order of the three treatments from left to right in each apiary varied.  With three treatments, there are 6 possible left-middle-right arrangements.  Therefore, in each region, there is one apiary of each arrangement to account for possible effects of drift.  Hive bodies were also painted various colors and patterns to help with orientation.  Each apiary was set up with an electric bear fence.  They are solar powered and baited with bacon so the bears are encouraged to take a bite and get a shock!

The bees came in 3-pound packages and were installed on two dates; 17 April for small-cell bees and 23 April for large-cell bees.  The weather was not cooperative on 17 April, with temperatures in the low thirties.  Most colonies survived, although the far northern site (Waymart, PA) suffered great casualties, with 7 of 12 colonies dying in the first 3 days.  These have since been replaced to keep the sample size in place for research.   On the day of installation, all colonies were subject to an alcohol wash for varroa mites.  Mite numbers were comfortably low, with an average of fewer than 1 mite per 100 bees.  Colonies in the conventional and organic treatments were treated with oxalic acid dribble according to the package instructions on day 3, showing low mite numbers again on sticky board counts.

The colonies are being assessed the week of 7-11 May and  21-25 May. They look very good so far!  There are a few queen issues, but the bees are busy building comb and collecting pollen and nectar for the new brood.