Tracking the Health of Feral Bees in PA, 2018 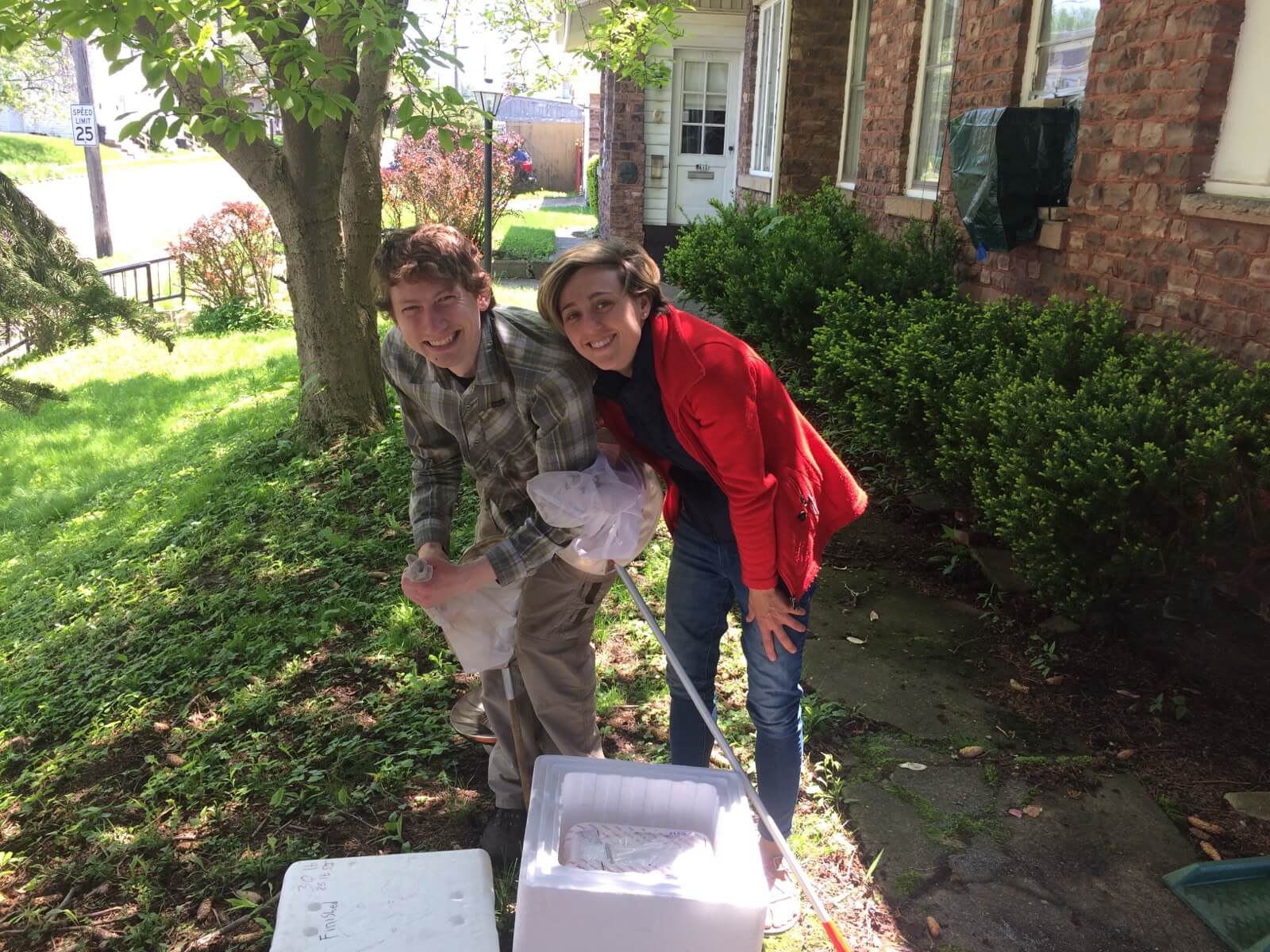 Tracking the Health of Feral Bees in PA, 2018

Since 2016 the López-Uribe lab has been leading a citizen science project that aims to map and characterize the health status of feral bees across Pennsylvania (check out our website: Tracking the Health of Feral Bees in PA). We had reports of 17 known feral locations by the end of 2017. Since then the project has grown substantially. In early 2018, a total of 56 feral locations were reported. The colony locations range throughout the state, from Pittsburgh to Harrison Valley and Philly to Scranton (figure 1).

Photo 1. Chauncy Hinshaw collecting samples from a feral colony in a tree near Saxonburg, PA

This year, we conducted the first overwintering survey of feral colonies in Pennsylvania and found a feral wintering loss of 42%. These losses are close to the winter losses reported for managed colonies in Pennsylvania by the Pennsylvania State Beekeepers Association (PSBA), which was 44.5% for the 2017-2018 winter. However, Pennsylvania’s wintering loss was higher than the average reported for managed colonies in the US (via Bee Informed Partnership) and Canada (via Canadian Association of Professional Apiculturists), both of which averaged 32% this past year. In the states, beekeepers reported the primary reason for colony loss was ineffective control and mismanagement for the varroa mite, while beekeepers throughout Canada attributed colony loss primarily to weather and poor quality queens. Varroa pressures ranked among the top three causes of wintering losses according to the Pennsylvania beekeepers (PSBA). There is a general consensus that multiple factors are impacting bee health including poor nutrition, pesticides, pathogens and parasites. These stress factors all interact with each other, reducing bees fitness and survival. With added stress, bees more easily succumb to disease pressure and do not make it through winter.

Katy Ciola Evans collecting samples from the side of a house in Lake Erie, PA.

This spring, the feral team started collecting samples later than anticipated due to unusually cool temperatures that persisted into May, as well as unpredictable rain. In 2018, we began collecting spring samples in May (photo 1 & photo 2) and will resume the fall sampling collections between September and October. We will share with you an update about the pathogen and immune gene expression levels of these colonies the 2018 Annual PSBA conference this November in State College!

In addition to quantifying pathogens and immune genes, this year we also compared behavioral traits between feral and managed colonies. In collaboration with Romina Russo, a visiting scientist from the National Institute of Agricultural Technology (INTA) in Argentina, we assessed the hygienic behavior of feral versus managed colonies using a pin-kill assay. Honey bees are considered more hygienic when they are better able to detect, uncap, and remove infected pupae, slowing the spread of disease and the population growth of varroa. For each colony, we selected a frame with greater than 25% capped brood on both sides. On each side of the frame, about 100 capped pupae (photo 3a) were punctured with a small pin, about the size of a sewing needle or entomological pin, and the frame was placed back in the colony (Image 3b). After a period of 24 hours, we returned to the colony to record how many of the pin-killed pupae had been removed (Image 3c). The pin-kill assay measures hygienic behavior based upon the number of pupae that the bees removed from their cell after a period of 24 hours.
We tested a total of 5 feral and 4 managed colonies with the pin-kill assay. The top 4 “hygienic” colonies were feral, meaning that the feral colonies on average removed more of the dead pupae after 24 hours compared to the managed bees. In addition to performing hygienic assays, we recorded phoretic mite counts via detergent washes (similar to alcohol washes but detergent was used). Overall, the colonies had relatively few mites, less than 4 mites/100 bees). We are hoping to expand this aspect of the project next year.Photo 4. A feral colony in an abandoned shed outside of Harrison Valley, PA.

For the third year of this project, we will continue mapping the distribution of feral bee colonies and their overwintering success throughout Pennsylvania (photo 4). We would like to collect long-term data on the survival and distribution of feral colonies, so we hope we will continue to have your support next spring. If you do locate a feral colony and do not wish us to collect a sample or if the feral colony is in a remote location, simply recording the location and survival of the colony would be of great importance and interest to our research (photo 5).

Photo 5. A feral colony in a tree near Linesville, PA.

We are very grateful to the 39 participants that have reported locations of feral colonies and to the individuals who donated feral cut-outs and swarms. We rely on the active participation of beekeepers and the public to report locations of feral bees throughout PA. When we study feral bee colonies, they remain unharmed during collection and all information that you share with us remains confidential. Many times the cavities of colonies that died over winter become re-colonized, so if you know of a feral colony that died over winter please double check the cavity this fall. If you are aware of an unmanaged or feral honey bee colony, please share with us information regarding its location via our Tracking Feral Bee Health FORM or via email at the López-Uribe Lab (lopezuribelab@gmail.com).

We would like to thank everyone for their support and participation!

This work is supported by the USDA National Institute of Food and Animal Health Appropriations under Project #PEN04620 and Accession #1011873.