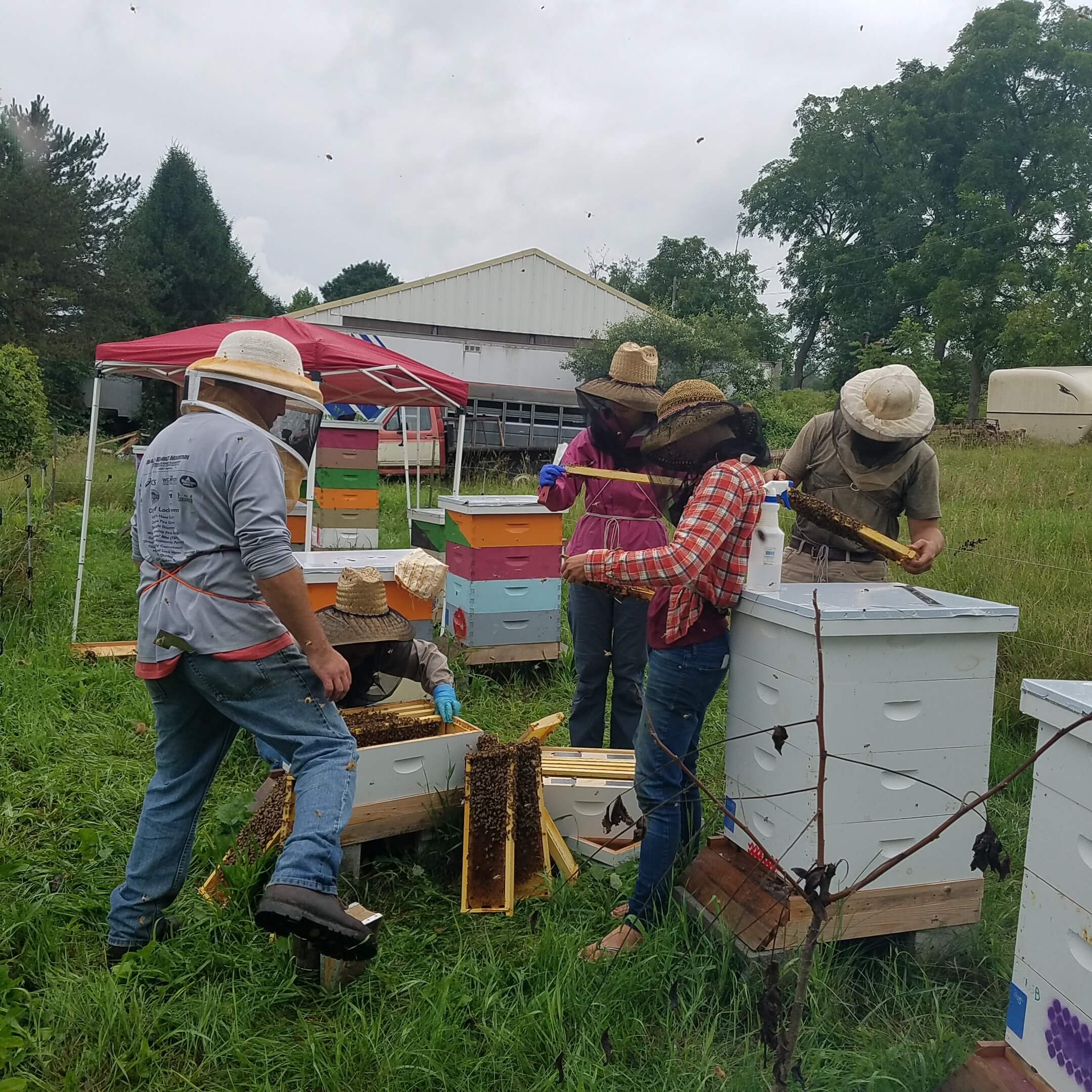 In late April, we established 288 honey bee colonies in three regions of Pennsylvania and one region in West Virginia for the COMB (Conventional and Organic Management of Bees) project. In each region, we are working with two certified organic farmers who allowed us to place three apiaries, each holding 12 colonies. In each apiary, four colonies are managed using each of the three management systems: conventional, organic, and chemical free (Figure 1). For establishment and management of colonies, we are using equipment and protocols established with stakeholders in November and December (read more).

Figure 1. Diagram of an apiary at each site.

Photo 1. Experienced beekeepers in central Pennsylvania searching for a queen.

Because of the size of this project, we hired experienced beekeepers from each region to assist with colony assessments (photo 1).  Each team is assessing the colonies every two weeks to ensure colonies were well-fed and queenright. Each month, starting on the day of package installation, we used an alcohol wash to determine the levels of the varroa mites in each colony using an in-field test with washer fluid.

To monitor the levels of pathogens and the levels of immune gene expression, we collected bees in May and July, and will collect samples again in October. The amount of drawn wax comb was also quantified each month (April through August) as the number of drawn frames. Overall, the colonies are in good shape, with three medium boxes of drawn comb and low varroa mite populations.

The colonies were obtained from a few suppliers, therefore, their genetics varied.  To ensure that any differences between the management systems are due to management and not genetics, the colonies were requeened with queens from a single source colony.  In July and August 2018, we removed the current queens and added new queens to all colonies (photo 2). Queen acceptance varied, but every effort was made to ensure that the colonies are descended from the same line of bees.

We treated the colonies for varroa mites according to the protocols (ApiVar for conventional colonies and Formic Pro for organic colonies) and will conduct follow-up mite assessments soon. We’re gearing up for winter by planning to feed colonies, installing wind breaks, adding Styrofoam under lids, and installing mouse guards.

Varroa mite levels remained low throughout the summer, but increased over time (Figure 2).  We are actively assessing levels of the gut parasites Nosema ceranae and Nosema apis, and viruses such as Deformed Wing Virus and Black Queen Cell Virus.